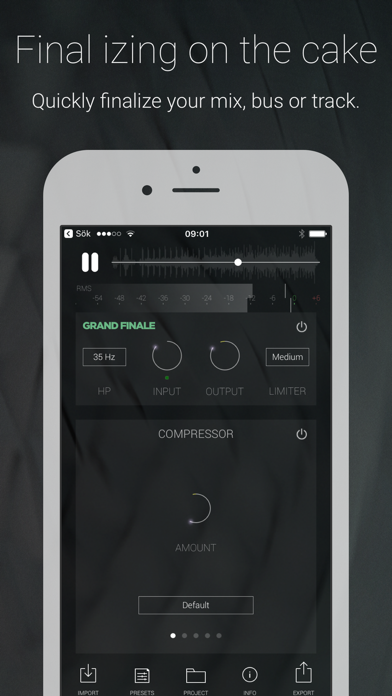 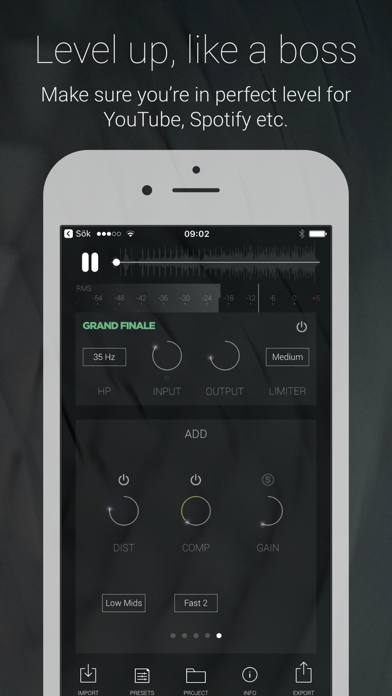 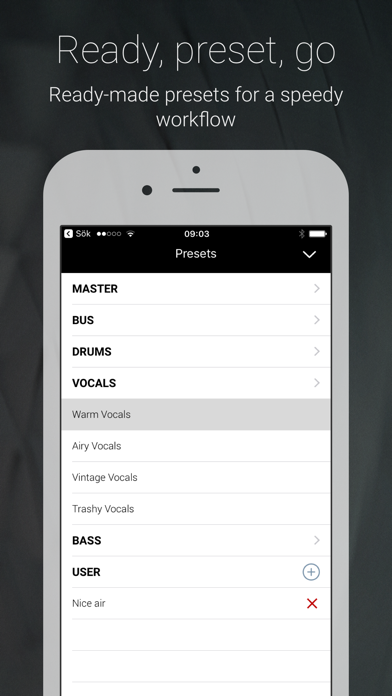 Grand Finale is a multi effect audio processing application designed for finalizing complete mixes, stems, voice overs, buses and/or individual audio tracks. The plug-in offers several modules in a pre-routed configuration. Each module has parameters to alter, and most modules offer a set of algorithms to select. These features come together to make Grand Finale a powerful tool for quickly finalizing a track, bus or mix.

Import audio from iTunes, AudioShare, or extract from a video in the camera roll. Audio can also be imported by using the “Open In..” option in any other app that can export audio.
Use the playback controls to start and stop playing, and alter the module knobs/options to change how the audio is processed. When satisfied with the result, tap Export to render and save the finalized audio file.

• Accurate RMS and LUFS metering (tap the meters to swap)

“The magic behind this plugin is the compressor on the bottom portion, the stereo processor and the incredible EQ section. The bass and treble EQ (in default mode) is the best I've heard by far in a plugin.“ - Robbie Soukiasyan (Skrillex, Tiesto, Usher and more..)

“...and Grand Finale is a genuinely impressive processor for not only the master output, but also mix busses and even individual tracks…” - Computer Music Magazine (CM254)

“Overall, we are impressed by Grand Finale. The plug-in is well thought out and has a very modern, sleek user interface that doesn’t compromise on intuitiveness, metering, or other relevant information and features. Such things help with standing out in the crowded mastering/finalization plug-ins market.” - Gearnews.com

Note! Grand Finale is a stand alone application and will only run on a 64 bit CPU. Supported devices are iPad Air (or later), iPhone 5S (or later), iPod Touch gen 6 (or later).