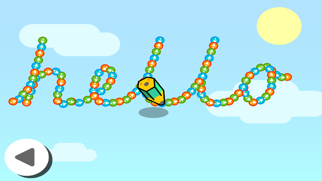 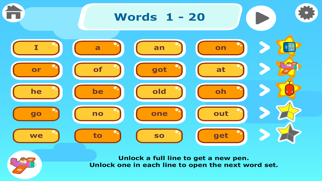 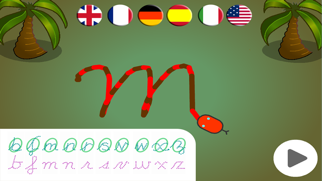 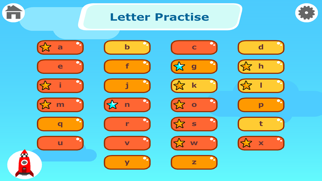 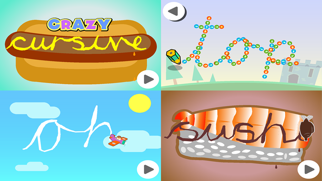 A new crazy character/ scene is unlocked with every 4 words written correctly.

Full Version Features include;
* Choice of cursive style letter e.g. two styles of the letter r.
* Personalised feedback to tell kids which letters they are totally awesome at and which letters they could focus on practising.
* Practice of single letters in cursive style.
* The 100 most frequent words to try in cursive style.
* Multiple Players, useful to track the progress of siblings or of up to 10 players in a class.
* 'My Words', section where you could type in the weeks spellings to practice.
* A phonics based approach supporting the writing practice.
* Left / right handed adaptation
* You can also use Crazy Cursive to help learn a new language! Select from American English, UK English, French, German, Italian or Spanish words and phonics.

In the full version your child can practice writing the top 100 words in cursive style and can also type in their own words to practice. Letters are sounded out phonetically to allow your child to develop skills of breaking down words which is particularly useful for children with Dyslexia.

Thank you to the Teachers, Children and Parents of Fairlawn School London for your support and feedback. Special thanks to Fairlawn Teachers for being inspiringly Crazy for Cursive!

1.Relative ease in introducing cursive penmanship to preschoolers.
2.Prevents reversals and confusion of letters
3.Enhances spelling ability
4.Develops internal control systems that can be used as tool for learning
5.Potential for errors are diminished
6.Improved reading skills
7.Enforces the skills for patterns in reading and writing
8. Prevents erratic spaces between letters and words
9. Helps Left Handed Children
10.Use as a tool to put thoughts on paper quickly and easily

Conclusion:
We should teach our children ‘Cursive First, Print Later’.

Source: Samuel L. Blumenfield, "How Should We Teach Our Children to Write? Cursive First, Print Later!"

The British Dyslexia association recommend that children learn the continuous cursive style. The cursive style has some significant advantages for Dyslexic students. The key advantages to this system are:

* By making each letter in one movement, children’s hands develop a ‘physical memory’ of it, making it easier to produce the correct shape;

* Because letters and words flow from left to right, children are less likely to reverse letters which are typically difficult (like b/d or p/q);

* There is a clearer distinction between capital letters and lower case;

* The continuous flow of writing ultimately improves speed and spelling.