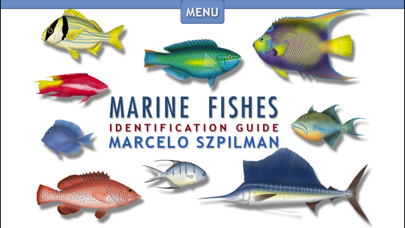 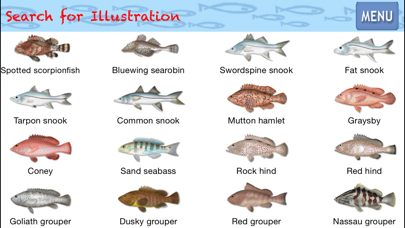 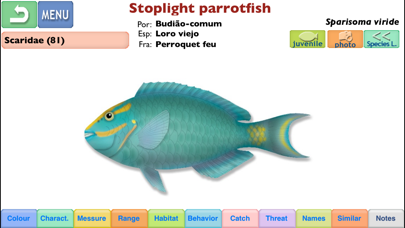 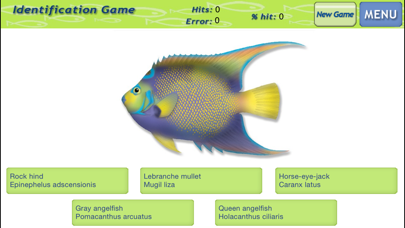 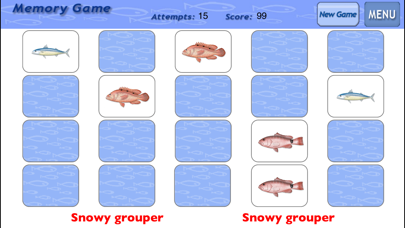 Identify the marine fishes caught in fishing, observed or photographed in dives or even at the time of fish purchase in a fish shop.

Fully interactive and very easy to use, this application was produced in Portuguese ,English and Spanish so that you can visually identify more than 200 species of marine fishes.

-Searches by names, families and genera.

-Keys for visual identification with 184 fish illustrations in black & white.

-A list of 778 scientific names and their common names in Portuguese, English, and Spanish.

-170 complete cards with 178 fish illustrations in color and 114 color photos.

Each card contains: Scientific name, common names (in Portuguese, English, Spanish, and French) and detailed information about its color, caracteristics, measures (with the brazilian and world record fishing), range, habitat, habits and behaviors, ways to catch and flesh quality (including if it's kosher), status of threat of extinction, other common names in English, Portuguese, Spanish, French, and Italian, and important notes. The similar species appear with the main, in a rotation system very interesting and well thought out.

-Dictionary of common names in Portuguese, English, and Spanish with more than 700 fishes. Fast and easy to use.

-This application based on the book Peixes Marinhos do Brasil – Guia Prático de Identificação (Marine Fishes of Brazil - A Practical Identification Guide), of the marine biologist Marcelo Szpilman. This book is listed and available at the Congress Library of the United States, and, since 2001, is STANDARD OFFIALLY adopted by the Brazilian Confederation of Underwater Sports and Fish for the classification of saltwater specimen in order to the approval of Brazilian records and technical guidance.

Updates: we intend to add new fish and new photos, whenever possible.