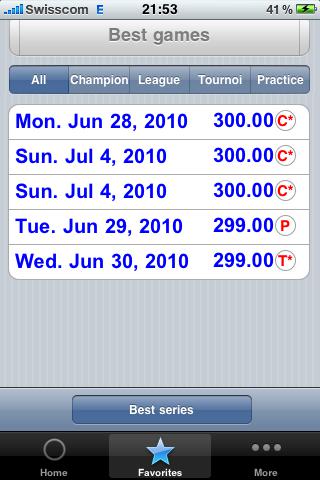 Some minor bug fixes and some cosmetics.

Prepared app for forthcoming major update.
, with many new features.

iBowling is for Bowling players who want to keep track of their games.

Players record their series after being played, in segment of 3 or 4 games. iBowling calculates the average in realtime:

This application comes in 2 selectable languages:

Further versions will include much more options, upgrades possible for an additional fee, updates are free within same versioning.

Planned updates will include:

Bowlers may add specific tournaments, championships, Leagues into the database, and keep track of their results for each individual league, tournament, championship, etc...

Also planned in furure versions:
- Number of Strikes, Spares and Splits per Games/series.

Adding Bowling Centers in the database, and giving the possibilty in selecting where played. Average calculation by center will then also be possible.

In order to give full advantage to this application and be as usefull as possible;
All comments and requests are welcomed on our web site:

We have voluntarily separated Leagues from Tournaments and Championships as in some countries these are different from each other.