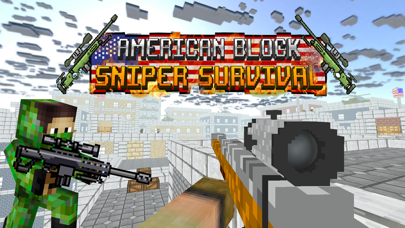 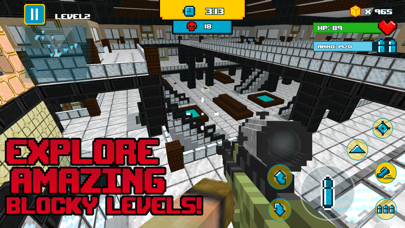 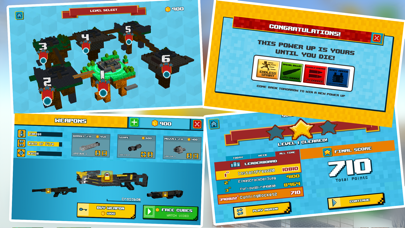 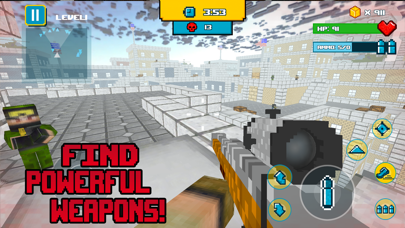 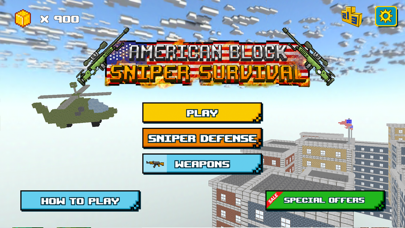 - New achievements! Go get'em all!
- Leaderboards implemented. Share your score with your friends!
- In-app purchases added. Now you can remove all the ads!
- Bugs fixed

If you like military blocky pixel games with sniper weapons then you will love American Block Sniper Survival.

Strike hard and kill or die in the most amazing running and shooting action free game! Take the role of the American military's most accurate sniper in his most challenging mission yet! Fight your way to survival in the intense Campaign mode, or test your mettle in the Sniper Defense mode! Block meets battle in arenas riddled with impressive and upgradeable weapons, where the fate of the world hangs on you!

**** SNIPER DEFENSE ****
Test your marksmanship in this exciting new mode, where you defend your tower against waves of enemies. They will be coming in left, right and center and you will have to spot them quickly and pull the trigger to stop them all.

Become a silent professional, and prove yourself as the world's finest Tier One Operator in a world drenched in a classic blocky look! Are you ready to survive?

Become a celebrated sniper hero in American Block Sniper Survival. This brutal running and shooting action game stars you as a sniper of a deadly operation. Trek through a devastated war torn city in pursuit of the enemy. Only once your objective has been met can you all the mission a success.

****READY YOUR WEAPONS****
They would descend upon villages, bringing fire and death with them. Grave after grave... I couldn't bear to be a part of that anymore. The issue was so big, so consuming, and the world had forgotten about the horrors confronted on the battlefield: achild's burnt sock on the side of the road, blood spattered alleyways, the haunting stench of death and the ring of a report playing on repeat in your head as you try to sleep at night... and the look on the target's face as the blood drained from his body. But it this was war, and the law of a good soldier was a lack of feeling. Numbing my emotions and attachments to the people and places I visited was a challenge, but I soon realized the benefit... because now I was unstoppable.

**** INTENSE GAME PLAY ****
Launch a fun, fast-paced 3D mobile gaming experience upon downloading this addictive FPS game. Strike fast and kill enemies in this combat challenge. Collect ammo and HP pickups as you advance. These pickups will decrease though, while the number of enemies increases significantly. This ultimate battle offers the option to go at it hand-to-hand or with a range of melee and firearm weapons. The choice is yours. Choose your difficulty, earn power-ups by completing quick tasks and unlock levels on the mission map select.