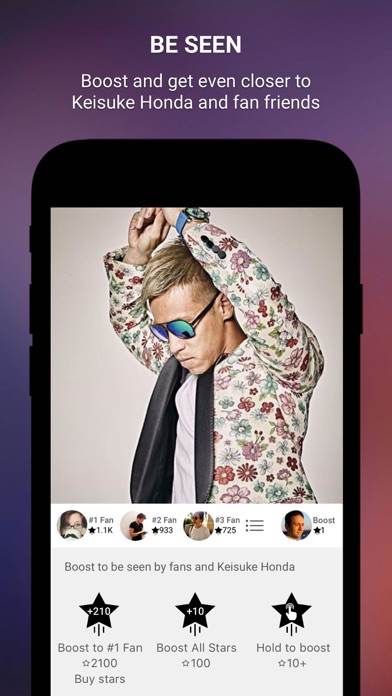 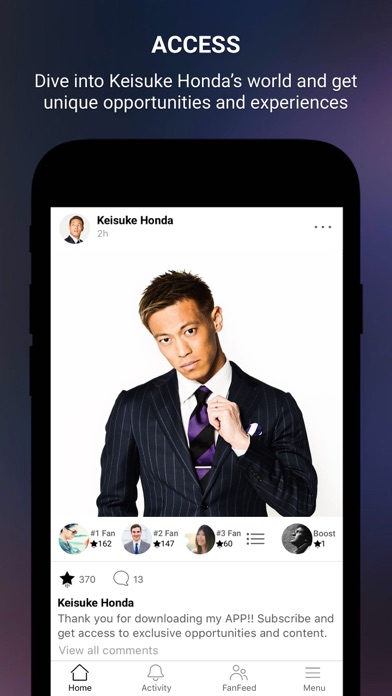 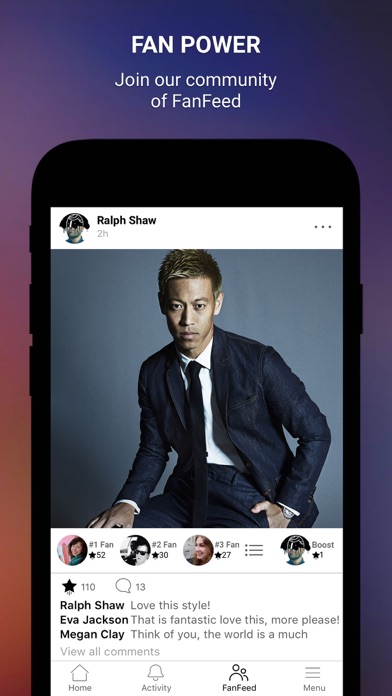 Stay connected to Keisuke Honda and do fun things :

- Check out the in-app social feed for live updates and videos.
- Boost your comments with Superstars, become a Top 3 Fan, and be seen by Keisuke Honda.
- Join exciting contests for a chance to win amazing prizes like meeting Keisuke Honda, event tickets, and more…
- Watch cool videos.
- Follow Keisuke Honda on social media.

About Keisuke Honda
Keisuke Honda is a Japanese professional footballer born on 13th June 1986 in Settsu, Osaka Prefecture, Japan. He plays as an attacking midfielder, but he can equally play as a winger or a deep-lying playmaker. Honda has featured as a right winger for Milan during 2014-15 Serie A season.
He has earned over 60 international caps since 2008, playing at the 2010 FIFA World Cup, the 2014 FIFA World Cup and winning the 2011 AFC Asian Cup, where he was also voted Player of the Tournament. He is also known for his free-kicks, dribbling and ability as a dead ball specialist.
In his teenage years, he played for Gamba Osaka from 1999 to 2001, before moving to Seiryō High School. In 2005 he signed a professional contract with Nagoya Grampus. During his 2005-2007 spell at the club he made 90 appearances and scored 11 goals.
In 2008 Honda penned a contract with Eredivisie club VVV-Venlo. Honda managed 16 goals in 36 games, helping his club to return to Eredivisie for the next season. His positive display sparked interest of the scouts of CSKA Moscow.
In 2010 Keisuke Honda moved to CSKA for an undisclosed fee, signing a four-year contract. Honda celebrated his debut for the club in the UEFA Champions League fixture between CSKA and Sevilla
On 12 March 2010 Honda netted his debut goal in the Russian Premier League match against Amkar Perm. From 2010 to 2013 Keisuke Honda made 121 appearances and netted 28 goals for CSKA.
In January 2014 the Japanese midfielder moved to AC Milan on a free transfer.
Honda was called up to the Japan U23 team before joining the Japan national squad in 2008. He scored the winner in the 2010 World Cup battle between Japan and Cameroon, subsequently gaining FIFA’s the Man of the Match Award.