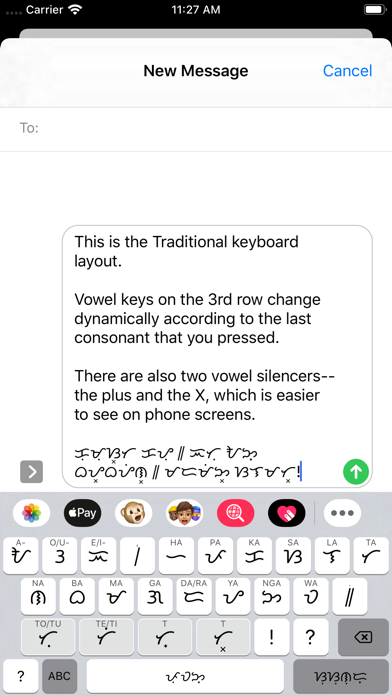 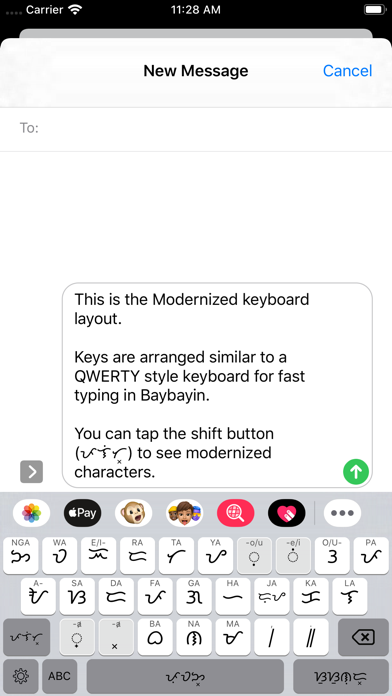 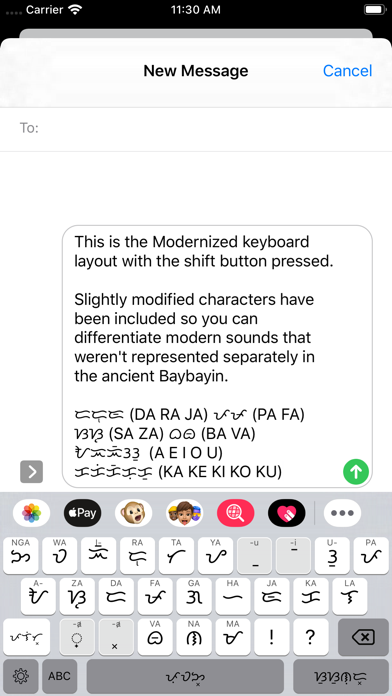 This is the first major update since we first released the Baybayin Keyboard nearly 5 years ago! Thank you very much your support. We are so humbled by seeing it be used by so many Pinoys and Pinays all around the world! Baybayin is no longer a dead writing system. Let’s keep it going!

First, we have renamed the keyboard layouts to Traditional and Modernized. These names better reflect their usage— especially going forward. You may need to re-add your keyboard setting in Settings. We apologize for this inconvenience.

Traditional Keyboard Layout Updates
------------------------------------
- The keys have be re-laid out according to the order found in the 1593 Doctrina Cristiana— rather than Western “alphabetical” order.
- Slightly color changes to highlight the kudlit keys.
- The Hanunu’o pamudpud virama has been replaced with the X virama. Unfortunately, the pamudpud is no longer compatible with the Tagalog unicode character set so we had to replace it. Although the X virama is a pretty recent invention, it is easier to see on a phone screen than the Spanish introduced cross.

Modernized Keyboard Layout Updates
--------------------------------------
- If you press the shift key, you will now see modernized characters for RA, ZA, VA, FA, JA, I, and U! They are just slightly decorated versions of their close relatives, as to not introduce a new character. They can be used for better clarity in your messages, whenever necessary.
- We introduced a RA that doesn’t require a special font. In fact, even if you install a separate font, RA no longer appears. System fonts have been locked down now, so we have to deprecate support for our modernized font. You can still use unicode 170D for RA— which is useful if you’ve installed a font for use in a publishing app. The RA we introduced is not perfect, but it resembles the RA that is now widely recognized. Let’s hope that the Unicode Standard gets updated to formally recognize RA.
- The other modernized characters (ZA, VA, FA, JA) also resemble a mixture of the of the popular proposals found on the Internet.
- The circle and apostrophe style kudlits have been replaced with a new dash kudlit. We felt that they were redundant. You can use the new dash kudlits to represent -i and -u. You can use the traditional dot kudlits for -e and -o.
- Similarly with the Traditional layout, we have removed the pamudpud, as it is no longer compatible with the Tagalog unicode character set.

We hope you enjoy the new update!

Baybayin is the indigenous script of the Philippines that has made a resurgence as a way to express Filipino cultural identity. The Baybayin Keyboard lets you type baybayin characters on your iPhone or iPad. It functions seamlessly as an alternate system keyboard that can be used within apps such as Messages, Facebook, Instagram, and Twitter.

The Baybayin Keyboard includes two keyboard layouts: Traditional and Modernized. The Modernized layout is laid out similarly to your QWERTY keyboard so you can type faster. It also includes modernized characters for RA, ZA, VA, FA, and JA, as well as alternatives for I and U vowels.