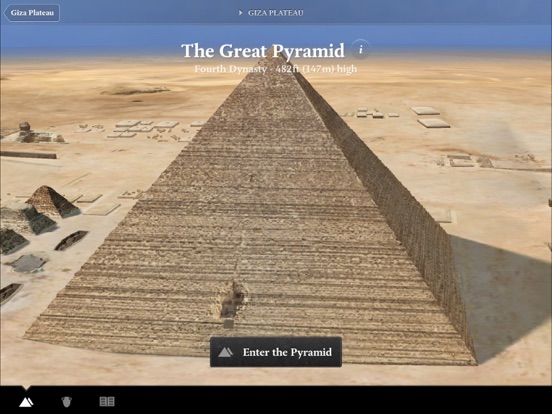 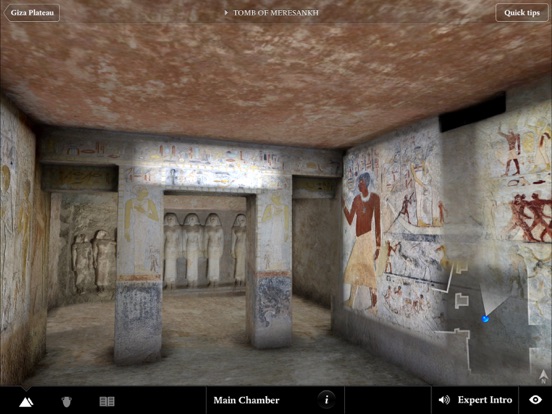 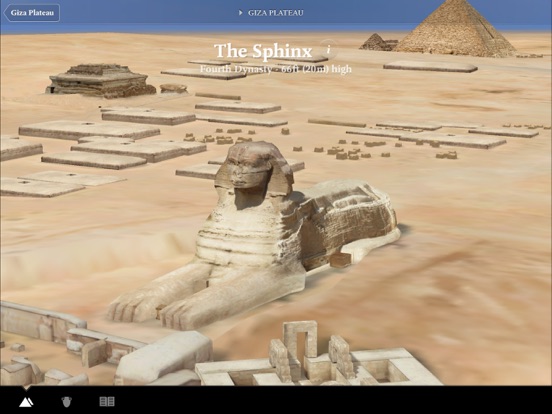 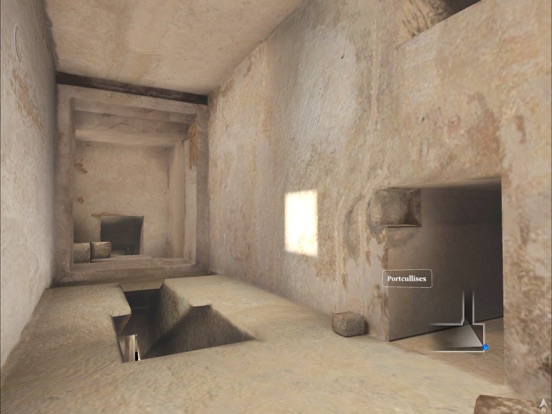 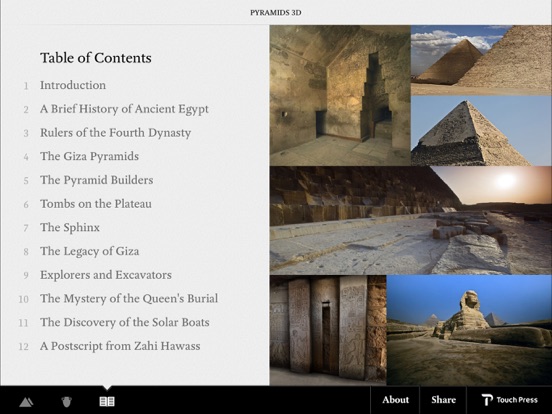 With this beautiful iPad app you can explore the incredible pyramids and tombs of ancient Egypt. Fly around the plateau where the pyramids and the Sphinx are located at Giza near Cairo. Enter and wander around the labyrinthine tombs and passageways. Examine stunning wall paintings in incredible detail, rotate royal statues and spin 3D objects. Everything has been painstakingly recreated from ultra-high-resolution digital imagery captured on location in Egypt by Sandro Vannini, the world's greatest photographer of archeological sites and antiquities.

To help explain and illuminate the world of the ancient Egyptians, there is an accompanying interactive book, specially written by world-renowned Egyptologist, Zahi Hawass with other expert archeologists. Touch any painting or object in the pyramids and tombs to discover what they represent, who made them and what place they have in the culture of the Old Kingdom. This exquisite app breaks new ground in presenting the treasures of the past and bringing them alive in your hands on the iPad.

• Highly detailed 3D representation of the Giza plateau for you to fly around
• All three main pyramids, the Sphinx and eight fascinating tombs to enter and explore
• Stunning annotated HD photography of the interiors of the pyramids and tombs
• 35 digital restorations of wall paintings showing their original appearance
• a collection of panoramic views at ground level
• Specially written text telling the story of the Old Kingdom, its rulers, and great monuments, supported with interactive illustrations
• Over 350 beautiful photographs vividly illustrating the Giza plateau, the excavations, and the building of the pyramids
• Animated and narrated expert introductions to the tombs from Egyptologist Bram Calcoen
• 40 exquisite antiquities presented as fully manipulable 3D objects that can be zoomed and spun to view from every angle
• 3D objects include Tutankhamun’s mask and the Solar Boat

The Pyramids - Wonders of the Old Kingdom is published by RGB, the people behind the best-selling iPad titles: The Elements, Solar System for iPad and The Waste Land, along with many other titles that have been App of the Week and Editor's Choice.

This title is produced and published in partnership with Heritage World Press and Laboratorio Rossi.