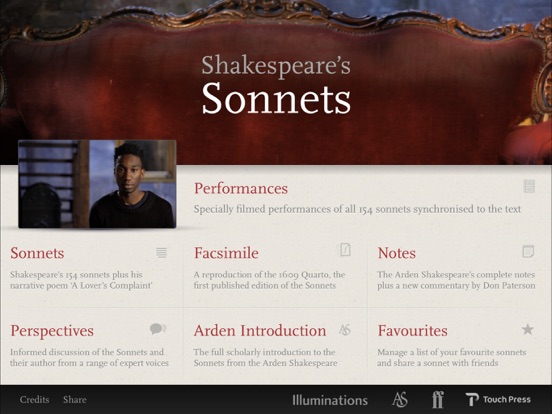 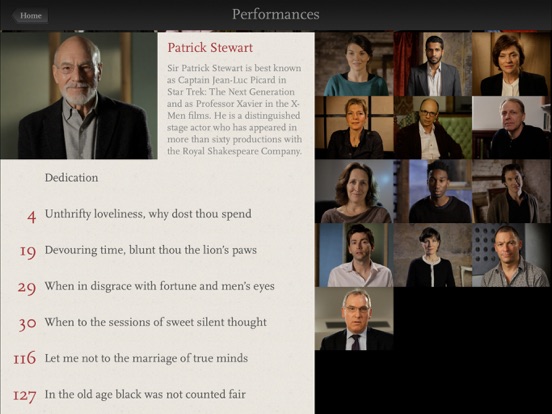 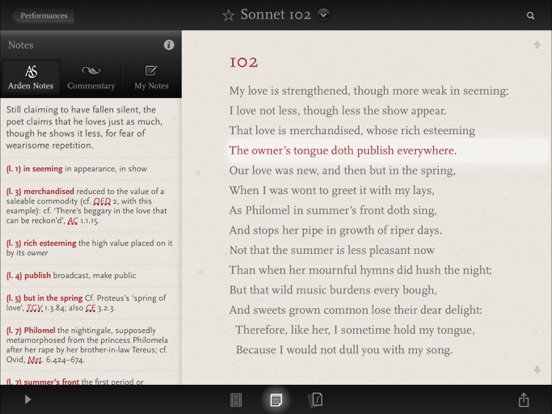 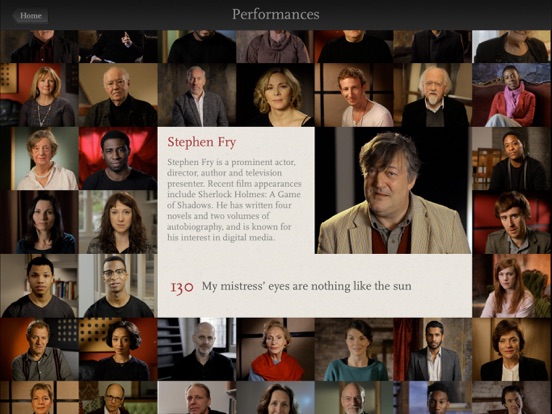 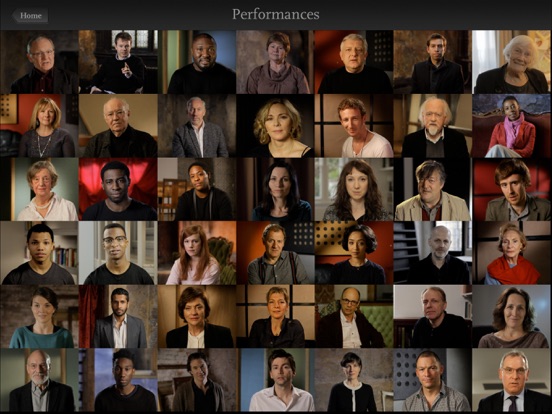 A masterly app...As accessible as it is scholarly, it’s an extraordinary achievement, that brings the sonnets bracingly to life and definitively sets the bar for the future of digital reading.'
– Robert Collins, London Sunday Times

The Sonnets presents William Shakespeare’s immortal collection of love poems in an interactive digital edition that allows you to explore, appreciate and understand this great work of literature as never before.

All 154 sonnets are performed to camera by a star-studded cast including Sir Patrick Stewart (Star Trek, X-Men, Royal Shakespeare Company), David Tennant (Dr Who, Hamlet), Kim Cattrall (Sex and the City), Fiona Shaw (The Waste Land, Harry Potter), Stephen Fry (The Hobbit) and Dominic West (The Wire). These performances – all specially filmed for the app – are synchronised to the text, which highlights line by line as each sonnet is spoken.

The performance videos, running over two and a half hours, are just the beginning. Also included are the complete Notes and Introduction from the Arden Shakespeare, offering unsurpassed scholarly commentary and insight. Touch a mysterious line or difficult word in any of the poems and the corresponding Arden Note highlights to provide comprehensive explanation. An alternative commentary on every sonnet comes from poet and musician Don Paterson, whose humorous and accessible style complements the academic rigour of the Arden Notes.

• Beautiful filmed performances of all 154 sonnets by an incredible cast of Shakespearian actors and experts
• The complete Arden edition text of The Sonnets plus A Lover’s Complaint
• The complete Arden Shakespeare notes and introduction fully integrated
• New commentary on The Sonnets by Don Paterson
• Facility to add your own notes on any sonnet
• High resolution facsimile of the original 1609 Quarto showing Shakespeare’s Sonnets as originally published
• Forty interviews with scholars and experts discussing the meaning of The Sonnets and their author
• Share-a-Sonnet allows you to send a sonnet to friends by email, Twitter or Facebook
• Second generation interface based on the acclaimed Faber / Touch Press literary app The Waste Land
• AirPlay enabled allowing the performances to be streamed full screen to AppleTV

The Sonnets are published by RGB, the people behind the best-selling iPad titles The Elements and The Waste Land. The Sonnets was produced and published in partnership with Faber and Faber, Illuminations and the Arden Shakespeare.