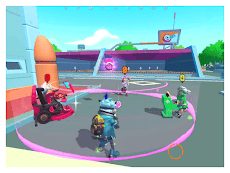 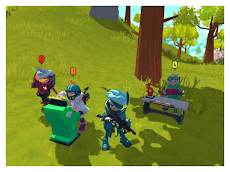 Sausage Man is a cartoon-styled, competitive shooting, battle royale game featuring sausages as protagonists. sausage man It is a game that you can get started with effortlessly and play anytime, anywhere. You will role play as funny and adorable sausages and fight in high-octane, imagination-filled battles.

There are more than just combats on your battlefield – you will find cuteness and joy all around. Here, you can sing, jump, and fire your guns on a Rubber Ball, or use a Double Jump to avoid precision shots from your enemies. You can also put on a Life Buoy and do a face-to-face gun battle in the water with others. When you are down, you will turn into a crying little sausage. You can pick up your teammates who have been downed with a “Come On” action.
The game’s crude-but-cute appearance system will help you become the most popular sausage there ever was. The unique Party Card system records your data, appearances, and achievements, showing other sausages just how lovable you are. It also provides you with various quirky costume sets including Koi, Cyberpunk, and Maid, as well as shamelessly cute poses such as blowing kisses, magical girl transformations etc. In addition, you can also use Bubble Emojis such as “Raise White Underwear-Flag” and “Whine About Injustice” to interact with other sausages.
Here, you will rely on your “naughtiness” and “cuteness” to slay hundreds of enemies on the battlefield, and become the king of the party!
In Sausage Game Man, players will experience the thrill of battle royale battles for up to 100 players at once. In addition, the battle area is also made very wide, and there are many cool customization's.

In addition to relying on intense shooting action with shooting animations to realistic weapon models, the battle royale game play offered by Sausage Man allows you to perform crazy and creative actions in dominating the course of battle.
In Sausage Man, there are two large maps to choose from, including; Battle Island with a size of 8x8 km with sandy urban buildings and wide plains, and Rainbow Island which has a smaller size of 4x4 km with a densely built environment.

Disclaimer :
This app is a instructions app created for Sausage Man players to help you and guide you to play sausage Man game this is a unofficial app and its not created by XD Entertainment .