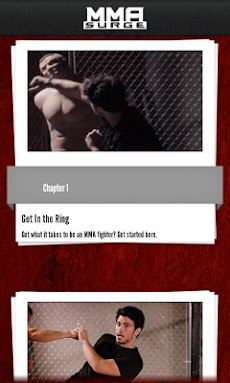 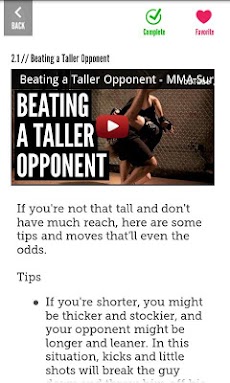 Got what it takes to be an MMA fighter? In this course, pro fighter Andrew “The Squid” Montañez teaches you all the brutal strikes, chokes, submissions, takedowns and throws you need to dominate in the ring.

With this app, you'll:

• Get every episode of the popular YouTube show “MMA Surge.”
• Take down fighters twice your size without breaking a sweat.
• Choke someone using only your foot.

• Defend yourself and others in dangerous situations.
• 5 submissions that'll give you an edge over the competition.
• Master moves used by UFC pros like Anderson Silva.

You want even more? Get ready:

• Get the training wihtout spending cash on that gym membership.
• Become a powerful fighter and compete on a national level.
• Learn the foundations of MMA from a champion fighter.
• Notice and exploit your opponent's weaknesses.

Your host for this app, The Squid, is a New York City native with a history of taking down the competition. He was undefeated in 14 no-rules Vale Tudo contests. In 2009, he won the Grappler's Quest Nationals in his weight class, beating five grapplers in a single day. And in 2010, he became National Fighting Championship's Middleweight Champion. He also coordinates stunts and choreographs fights for films and television. If you want the benefit of hands-on lessons, you can find him in Los Angeles, training fighters at Fortune Gym.
If you have any technical issues with the app or suggestions on what you'd like to see more of, email mobilehelp@mahalo.com. We're here to help.